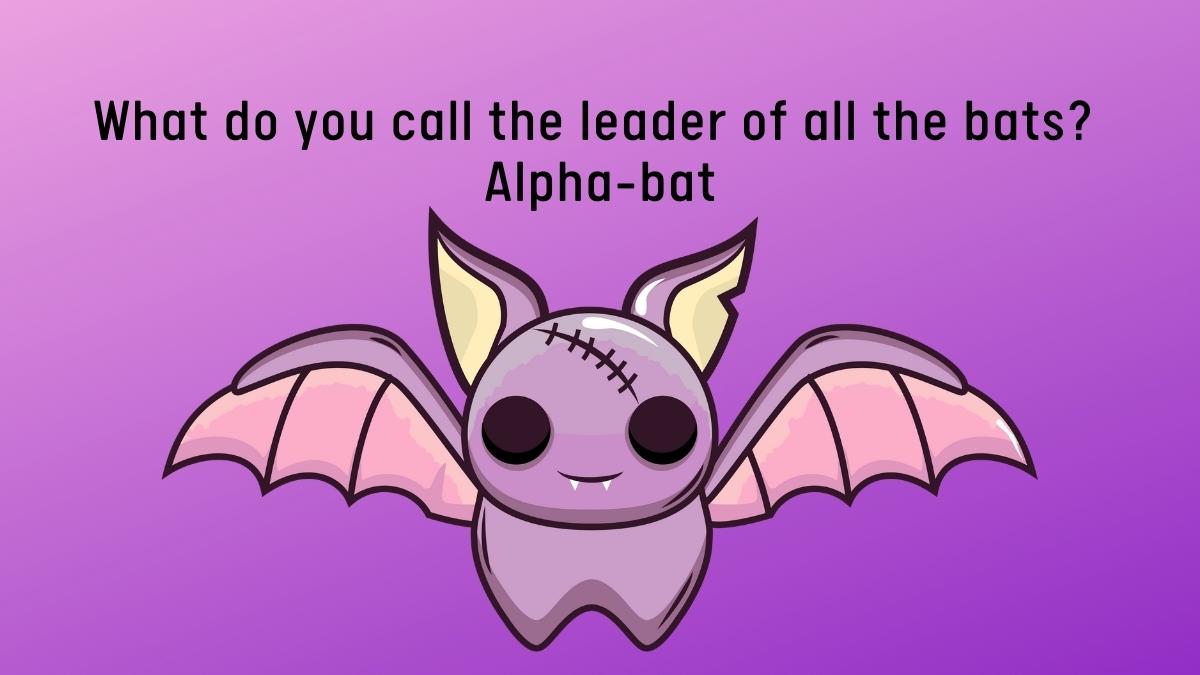 Bat Puns: Bats are vicious, horrifying, and quite deadly creatures. The mere sound made by them when flying can send shivers to your body. Whenever we talk about bats, the image of Dracula and other vampire characters pop up in our minds. To make the notion of Bats being less scary creature, we have carved the most hilarious bat puns and funny bat jokes that are more than sufficient to convince you that you can find bats quite amusing when the bat puns are funny enough.

What do you call the leader of all the bats? Alpha-bat

What is the first thing a baby bat learn in the school? Alphabat.

I have never seen such a beautiful hat ( bat) like you have.

This mat (bat) will look gobsmacking on our floor.

We are so entangled in the rat (bat) race that there is no hope to escape from it.

I think you should work on your bat (bad) attitude.

My bat (cat) is so furry and cute!

Which drink bats would like to have the most in their parties? Blood.

Who’s the most popular fictional superhero for bats? Dracula.

What does Batman and Dracula have in common? They both love to Bat!

In a com-bat between lion and the tiger, anyone can win.

When bats want to travel long, they don bat-packing.

I cannot take bath properly without my bat-tub.

A bat-room (bathroom) should be neat and clean so that everyone can use it.

It’s not a good thing to bat(chat) for a long time at night.

Would you please stop consuming junk food? You are getting bat (fat).

If human kids go to the day school, bats go to the night school to study.

If a female bat was the queen of the Egypt, she would be called Chiroptera (cleopatra).

She is such a spoiled bat (brat).

Chris Bat (Patt) is one of the highest paid actors in the world.

If bats were programmers, they would have created the unit Megbats (megabyte).

The fang (fan) base of Kylie Jenner is so massive.

You can’t score big runs with a low quality cricket-bat.

When it comes to baseball, he is such a fang-tastic player.

You can become a lot batter (better) by doing constant practice.

What did the rat says to the bat when a huge fight break between them? You really suck!

The favorite racing car of a bat is  Bat-mobile.

Where do bats keep all their money? Blood Bank.

You really wanna bet (bat) on this player despite all odds against him?

You should put an o-bat-tuary in the newspaper on your father’s demise.

Why bats don’t feel cold even in the spine-chilling winters? They use their wings as blanket.

You automobile tyres have gone bat (flat), you better change them now.

What do you call the fight between bats? Bat-tle.

What did one bat says to another bat on weekend? Let’s fang out and chill.

How does a bat sing? By screaming!

I shout therefore I see – Batman!

Because of bat (that) mam, we lost everything in the game.

How human beings perceive bats? They suck so hard.

I firmly believe the favorite sport of all the bats is bat-minton.

Conor Mcgregor used to be the bat-am (bantam) weight champion.

When it comes to acro-bat-ics, she is unbeatable.

No one can get out Virat Kohli, when he bats with utmost focus.

I think the bat-tery of this phone has gone dead.

What happens when a bat falls in love with computer programming? Love at first byte.

What do bats drink to stay awake at night for late studies?  Blood with extra Haemoglobin.

Bat-ista is my all time favorite WWE wrestler.

It’s my time to go on a sab-bat-ical and explore the different facades of the world.

If a bat were an actor, the most handsome actor would be called Bat Pitt.

Those bats who live outside their native caves are called ex-bat (expat).

What did mommy bat say to the baby bat at night time? Hang yourself or you won’t sleep well.

What do you call a bat who got hit by severe cold? Frost bat (bite).

His girlfriend refused to kiss because he had bat (bad) breath.

I am way batter than him when it comes to mathematics.

What did female bat say to the male bat when bitten by a snake? You have to suck me to save me!

What do you call the breed when a bat makes out with the bell? Dingbat.

For vampires, it’s not tit for tat, it’s tit for bat.

Ro-bat (Robert) Pattinson played the role of the Batman so eloquently.

What’s the most popular social media app among Vampires? Bat-sapp!