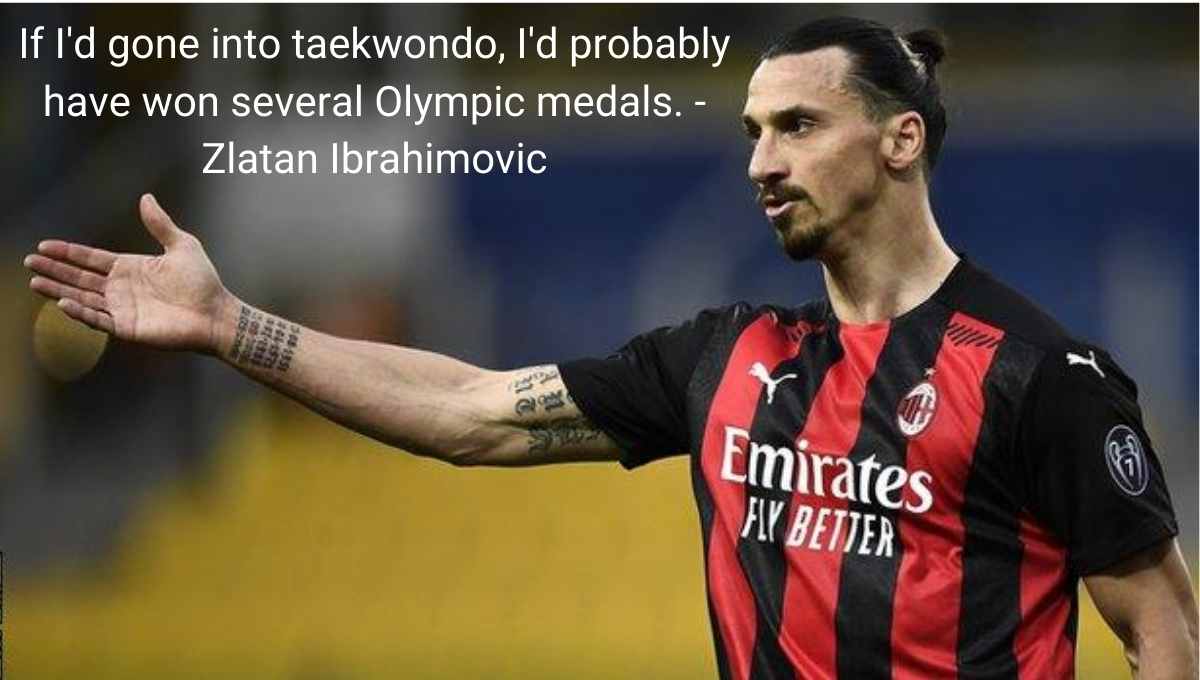 Zlatan Ibrahimovic Quotes: Zlatan is a name that needs no introduction in the world of Football. Widely regarded as one of the most lethal strikers of all time, Zlatan Ibrahimovic Football careers extends a four long decades in which he has bagged down 31 career trophies, scored more than 570 career goals, and played for almost all the coveted clubs like Barcelona, PSG, Juventus, A.C Milan, Manchester United, Ajax, and the list is humongous. Apart from unparalleled goal-scoring ability, Zlatan Ibrahimovic is also famous for his savage replies, trash talks, and one lines. Below, we have stated the most comprehensive collection of Zlatan Ibrahimovic Quotes on Football, success, and life that will give you a deep insight about how he operates from within.

“Swedish style? No. Yugoslavian style? Of course not. It has to be Zlatan-style.”

I do not need a trophy to tell myself that I am the best. Zlatan Ibrahimovic

Nothing is written in stone, as a career is an unpredictable journey.-  Zlatan Ibrahimovic

Arsene Wenger asked me to have a trial with Arsenal when I was 17. I turned it down. Zlatan doesn’t do auditions.-  Zlatan Ibrahimovic

“What do you mean, ‘present?’ She got Zlatan.” – On his ex-girlfriend’s engagement gift.

“I think I’m like wine. The older I get, the better I get.” — Zlatan Ibrahimovic

You bought a Ferrari but you drive it like a Fiat.” — Zlatan Ibrahimovic

I read all the time that people think I’m arrogant. They say I am cocky, a bad character. I had that from a young age. But when they meet me, they say, ‘That image doesn’t fit you.’ – Zlatan Ibrahimovic

I’m not difficult to work with, trust me. – Zlatan Ibrahimovic

“We were looking through his playlist in the dressing room — there was lots of Justin Bieber, Jonas Brothers and Selena Gomez. It is nice to know that even David Beckham doesn’t have good taste in everything.”

“I don’t believe they can change the Eiffel Tower for my statue, even the people behind the club. But if they can, I will stay here — I promise you.” – On his future with PSG.

Zlatan: “Only God knows who will go through.”

Zlatan: “You’re talking to him.”

If anything, the children of Paris should be giving me even more money for having the privilege of being in the same city as my incredible quality. And so should David Beckham. Call it a Zlaritable donation. – Zlatan Ibrahimovic

I want to be remembered as the football player I was. The private person is nobody’s business. Zlatan Ibrahimovic

“It felt like I had 11 babies around me.” – On Chelsea players’ response to his red card in the 2015 Champions League quarterfinals.

“I like fireworks too, but I set them off in gardens or in kebab stands. I never set fire to my own house.” – His response to Mario Balotelli’s fireworks incident.

I wish anyone in this world could go to his fridge and pick whatever he wants. Because the day you open your fridge and there is nothing in it, it is difficult. –   Zlatan Ibrahimovic

“I can play in the 11 positions because a good player can play anywhere.”

I had time with my mother, but I really lived with my father. One time he gave all his salary so I could travel to a training camp. He couldn’t pay the rent, but he did that. – Zlatan Ibrahimovic

When I arrived at Barcelona, I was following a dream, but I now realize sometimes it’s better to be content with what you have rather than follow a dream which nearly kills you. – Zlatan Ibrahimovic

Onyewu resembled a heavyweight boxer. He was nearly 6-foot-5 and weighed over 15 stone, but he couldn’t handle me.” – Ibrahimovic on a tussle with former teammate Onyewu, during which the Swede broke a rib.

“If [Wayne Rooney] still wants to move next summer, or in January, I would urge him to come and play with me in Paris … If he did join, he would have to get used to the fact that Zlatan scores even better goals than him.”

When I started to play football, when I was around 15, 16, I remember the players that played on the national team and noticed that it was only typically Swedish guys. – Zlatan Ibrahimovic

Who is most deserving of all of the money that I, Zlatan, am paid? The answer is Zlatan. – Zlatan Ibrahimovic

The day I leave Paris is the day I go down a level or quit football. – Zlatan Ibrahimovic

“We usually say that you cannot become a legend before death. But I am a living legend.”— Zlatan Ibrahimovic

When I went to Juventus, I was young, but in training, I had legends like Fabio Cannavaro and Lilian Thuram marking me. I had to work hard to get my respect. Zlatan Ibrahimovic

“It was the fault of David Trezeguet, who made me do one drink of vodka after another. I slept in the bathtub. Now I hold my vodka much better.” – On having one too many after Juventus’ 2005 title win.

Mourinho is Guardiola’s opposite. If Mourinho brightens up the room, Guardiola pulls down the curtains and I guessed that Guardiola now tried to measure himself with him.”

Do you know what I love about hunting? That I am no one in the woods, no one at all. I thought the animals might recognize me, but they didn’t. They did not even ask me for any autographs. Zlatan Ibrahimovic

People often write after they finish their career, or they don’t play anymore, or they are not anymore active. So I say, why do that? And let’s do it differently. – Zlatan Ibrahimovic

“I don’t think that you can score as spectacular a goal as those of Zlatan in a video game — even though these games are very realistic these days.”

I’m a guy of 92kg. I haven’t got the physique of someone who can work back and then sprint up front again throughout a match! – Zlatan Ibrahimovic

People are very curious and have written a lot of things about me. Right or not. I never comment on those things, because it’s not much of my thing to comment on everything that’s written about me. – Zlatan Ibrahimovic

One time I got dressed in all black, Rambo-style, and took a massive pair of bolt-cutters and nicked a military bike. – Zlatan Ibrahimovic

Everybody tries to score a great goal, and I am lucky I have netted a few. – Zlatan Ibrahimovic

I still feel I need to do things 10 times better than other players. Just to be accepted and to improve myself. – Zlatan Ibrahimovic

Best player I ever played against? I mean, I played against many, many good players, so I don’t know who to keep. I would say Ronaldo the Fenomeno. – Zlatan Ibrahimovic

“If I had played in England I would have destroyed it, like I have everywhere else.”

“I’m like Muhammed Ali. When he said he would knock someone out in the fourth round, he did it.” — Zlatan Ibrahimovic

“I don’t need the Ballon d’Or to know I’m the best. It matters more to some players.”— Zlatan Ibrahimovic

“It’s true I don’t know that much about Ligue 1, but Ligue 1 knows who I am.” — Zlatan Ibrahimovic

“England is a very strong league, with three or four of the best teams in Europe, but, if I had played there, I would have destroyed it, like I have everywhere else.” — Zlatan Ibrahimovic

“Come to my house and you’ll see if I’m gay. And bring your sister.” — Zlatan Ibrahimovic

“Wherever I go people recognize me, call my name, cheer for me. But there are names no one cares to remember, that no one cheers for: the 805 million people suffering from hunger in the world today.” — Zlatan Ibrahimovic

“I like Balotelli: he’s even crazier than me. He can score a winner, then set fire to the hotel.”— Zlatan Ibrahimovic

“At Barca, players were banned from driving their sports cars to training. I thought this was ridiculous – it was no one’s business what car I drive – so in April, before a match with Almeria, I drove my Ferrari Enzo to work. It caused a scene.” — Zlatan Ibrahimovic

“PSG’s project is to dream bigger, but if you buy Messi, you don’t dream bigger – you are bigger!”— Zlatan Ibrahimovic

You always need something to complain about. And if you can’t come up with anything better, you come along with team leaders. I don’t believe in this chitchat.” — Zlatan Ibrahimovic

“An injured Zlatan is a pretty serious thing for any team.” — Zlatan Ibrahimovic

“One thing is for sure, a World Cup without me is nothing to watch so it is not worthwhile to wait for the World Cup.” — Zlatan Ibrahimovic